The Murrumbidgee Council elections are on Saturday, 9 September. It is the first time since the amalgamation that residents have the opportunity to vote for who will represent them on Council. 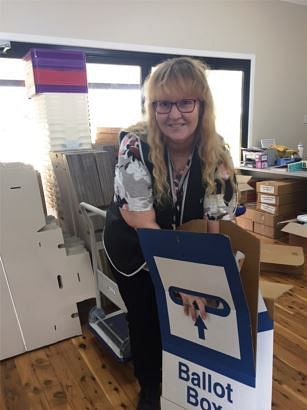 The Council is made up of the previous Jerilderie and Murrumbidgee Shire Council areas and around 2800 residents are enrolled to vote.

The new Council comprises three wards, with three Councillors representing each ward. At the election people will vote for the Councillors to represent their ward.

“This is an opportunity for members of the community to make a difference,” he said.

“We are looking for capable people with passion and commitment to nominate as candidates in the upcoming elections and help lead and continue the work already started by our Council.”

Voting is compulsory for everyone enrolled in the Council area so now is the time for you to check your enrolment details to make sure they are up to date.

The NSW Electoral Commission is managing the election on behalf of Council. To check your details and for everything you need to know about the election visit www.votensw.info or call 1300 135 736.

Nominations, including a completed Candidate Information Sheet, can be lodged with the Murrumbidgee Council Returning Officer Jan Mitchell, who has been appointed by the NSW Electoral Commission. She is based at the Darlington Point CWA Hall located at McAlister St, Darlington Point.

For more information about how to nominate for your local Council election—including nomination and registration details, voting processes and important dates—visit the NSW Electoral Commission website at www.elections.nsw.gov.au.

A reliable data communications link across the Murrumbidgee Council area is starting to take shape.

Master Chefs of the future have been given a helping hand to hone their culinary skills.

Men at Murrumbidgee Council weren't afraid to get in touch with their feminine sides last week, donning pink in support of a good cause.

Age No Barrier to Beautiful Art

When it comes to creating beautiful artwork, age is no barrier.This is especially true for a talented group known as the Murrumbidgee Arts Kinship Enterprise (MAKE).

Council Plans for The Future

Murrumbidgee Council has outlined what they plan to deliver for the community over the next four years.

Following the merger of Murrumbidgee and Jerilderie Shires, the Department of Premier and Cabinet coordinated a Community Satisfaction Survey with residents and ratepayers of the newly formed Murrumbidgee Council.

As the world marks 99 years since one of the most successful advances was made by Allied Forces during World War I, Murrumbidgee Council has announced it is now the proud owner of a Sir John Monash portrait.