Men at Murrumbidgee Council weren’t afraid to get in touch with their feminine sides last week, donning pink in support of a good cause. 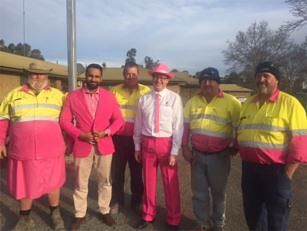 Real Men Wear Pink, which runs from June 12 to 18, is part of a national campaign encouraging men to “Get Pinked” to raise funds for breast cancer research.

The campaign aims to raise $1.5 million for the National Breast Cancer Foundation, to help fund research that harnesses the powerful data from genetic testing so that all women and men with a high risk of inheriting breast cancer have information and choices that could prevent them being affected by breast cancer.

Council’s General Manager Craig Moffitt said the campaign was a way to help support the researchers and the important work they do.

“This campaign is a bit of fun to be involved in, but the message is a serious one,” he said.

“I congratulate those who got behind this event and I urge others in our community to look at how they could help this worthwhile fundraiser.

“Unfortunately we all know someone who has been affected.”

Council fundraising efforts include a barbecue, held on Thursday 15 June at the Darlington Point branch office, with a similar staff event to be held this week in Jerilderie.

Council staff have raised $450 so far. To donate or join the campaign visit www.realmenwearpink.org.au

The Murrumbidgee Council elections are on Saturday, 9 September. It is the first time since the amalgamation that residents have the opportunity to vote for who will represent them on Council.

A reliable data communications link across the Murrumbidgee Council area is starting to take shape.

Master Chefs of the future have been given a helping hand to hone their culinary skills.

Age No Barrier to Beautiful Art

When it comes to creating beautiful artwork, age is no barrier.This is especially true for a talented group known as the Murrumbidgee Arts Kinship Enterprise (MAKE).

Council Plans for The Future

Murrumbidgee Council has outlined what they plan to deliver for the community over the next four years.

Following the merger of Murrumbidgee and Jerilderie Shires, the Department of Premier and Cabinet coordinated a Community Satisfaction Survey with residents and ratepayers of the newly formed Murrumbidgee Council.

As the world marks 99 years since one of the most successful advances was made by Allied Forces during World War I, Murrumbidgee Council has announced it is now the proud owner of a Sir John Monash portrait.